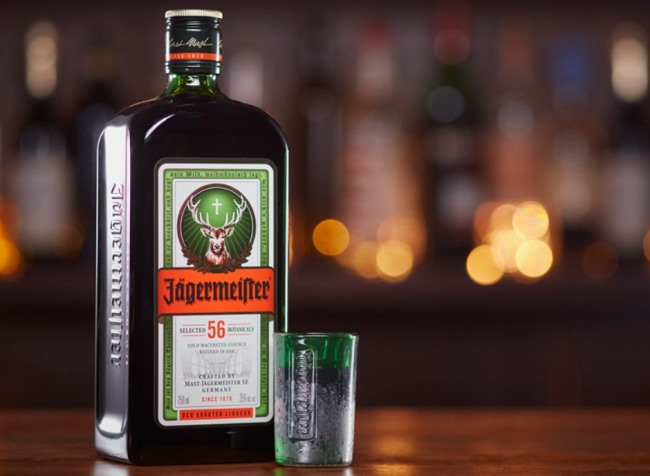 Beer flows through German veins. The reputation of beer made in Germany almost overwhelms the presence of top-notch liquors in this country.

But this country still has alcohol brands that blow your mind. In addition to the big names like Jägermeister or Schnaps, the top famous German alcohol brands below will bless any liquors enthusiast!

Schnaps refers to a broad range of alcoholic beverages in various forms, such as distilled fruit brandies, herbal or flavor grain liqueurs, and infusions. Fruit, grain, and sugar are the most fundamental ingredients for making Schnapps German alcoholic drinks. The result is a liquor with low alcohol content and a warm taste.

One of the most famous Schnaps in North Germany is the Doornkaat Schnapps produced by I. B. Berentzen. Founded in 1758, Berentzen firm has successfully turned this malted corn-brewed schnaps into a classic with an unforgettable taste. Doornkaat grain liquors are distilled with various flavors, so their taste is similar to mild rye whiskey or gin.

If you are looking for a German digestif with a herbal flavor, then Jägermeister should be your first choice. The recipe for this Kräuterlikör (herbal liquor) was created by Curt Mast in 1934 and it has remained intact to this day.

A genuine bottle of Jägermeister is a combination of 56 different herbs, roots, fruits, and spices that are crushed and soaked in a liquor-water mixture. They are aged in oak barrels for about one year. Then it’s finished with the addition of caramel and sugar.

With an alcohol content of 35% by volume, Jägermeister served cold or with ice always refreshes your taste buds for a great meal. 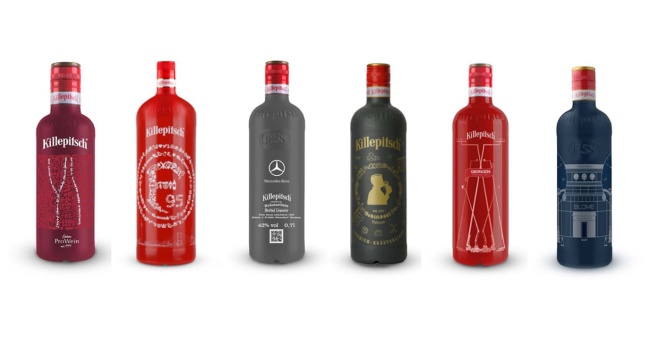 Produced in 1858 by the Busch family, Killepitsch with 42% ABV has excellently won numerous awards, especially the recognition of “Exceptional” from the Tasting Institute of Chicago.

Yet Killepitsch still has its special notes with 98 herbs, fruits, and berries aged in stainless steel tanks. That gives out a deep, complex, and unique taste. Using chilled Killepitsch as a shot-ice cold, a cocktail, or digestif are all great. 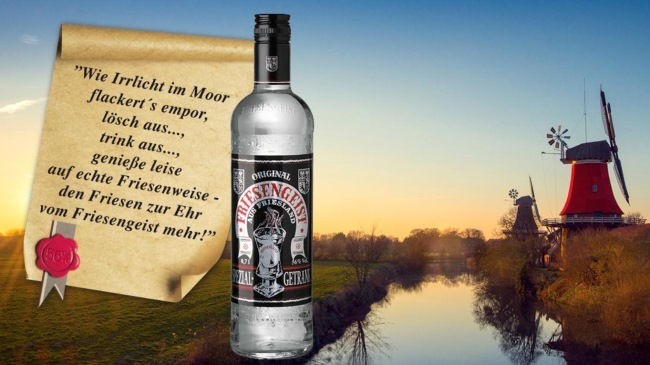 Friesengeist is a masterpiece in alcoholic drinks with flavors characterized by spicy anise and cool peppermint. This liqueur was developed by Johann Eschen in 1957 and is currently owned by the Behn brand of spirits.

With a traditional recipe from the East Frisian region, Friesengeist is the perfect ending to a hearty meal. Anyone who has ever enjoyed a shot of the burning 56% Friesengeist will not be able to forget the intense aroma, as well as the bittersweetness that stimulates the taste buds. 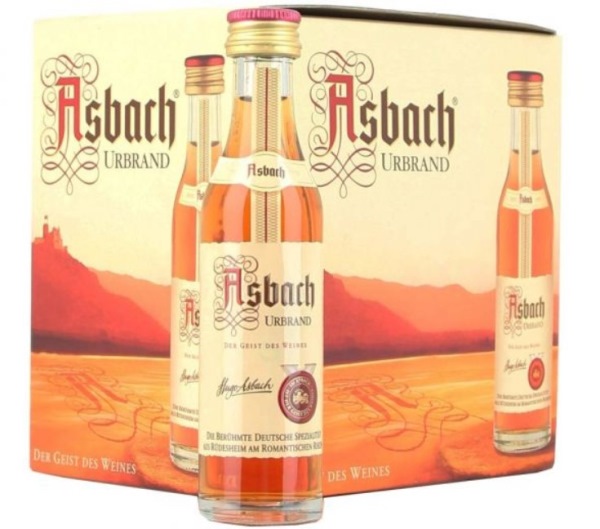 Asbach Uralt is a German best-known brandy line first produced in 1892 by Hugo Asbach named “Rüdesheim Cognac.” Later, the product was renamed Weinbrand due to the Treaty of Versailles.

The drops of Asbach Uralt are characterized by a smooth amber color, sweetness mixed with pungent spice, aged for a long time in German oak and Limousin.

The classic version of this Asbach Uralt brandy hits your throats with the flavors of chocolate, coffee, honey, caramel, and nuts. This strongly alcoholic German drink is recommended to be thoroughly enjoyed in one shot. However, you can also sip and enjoy the intense flavor that sticks to your tongue. 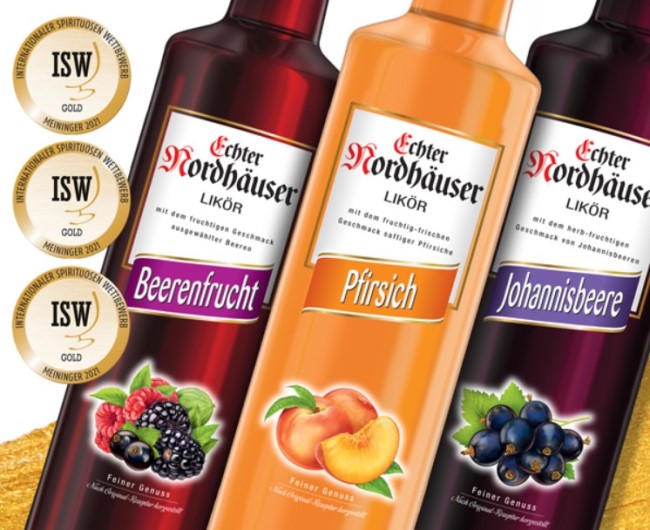 Echter Nordhäuser is a leading producer of Korn, a famous German liquor, with grain spirits made from rye and malt since 1507.

Korn refers to a colorless German distilled grain spirit fermented from rye, wheat, oats, buckwheat, and barley. Without fragrances, colors, or sweeteners, this purity makes it difficult for many to distinguish it from Vodka. However, it is filtered less than Vodka to preserve the original flavor of the grain in the drop.

Korn is divided into several types. The basic one will contain 32% ABV. Kornbrand or Doppelkorn will contain more than 37.5% ABV. 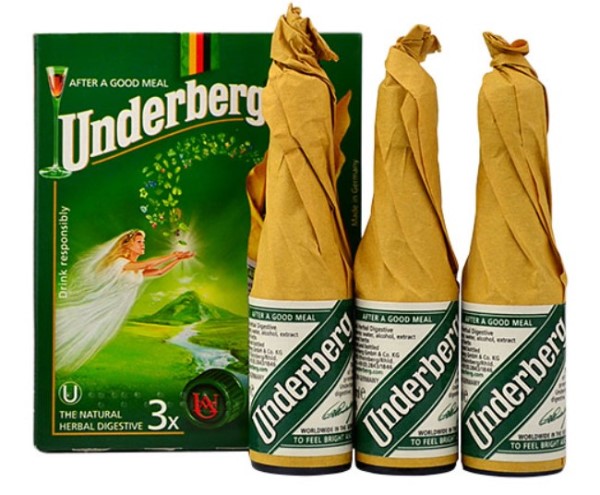 Underberg is a herbal liquor produced by the Underberg family since 1851. This alcohol drink contains 1.3% herbal extracts aged in Slovenian oak casks with the same secret and proprietary recipe since its founding. The final kräuterlikörs has an amber color with 44% ABV and a distinctively bitter taste.

Like other herbal liquors, Underberg is often served as a digestif drink in signature tall glasses. Currently, Underberg is one of the best-selling German alcohol brands on the market because selling them in the United States does not require a liquor license. 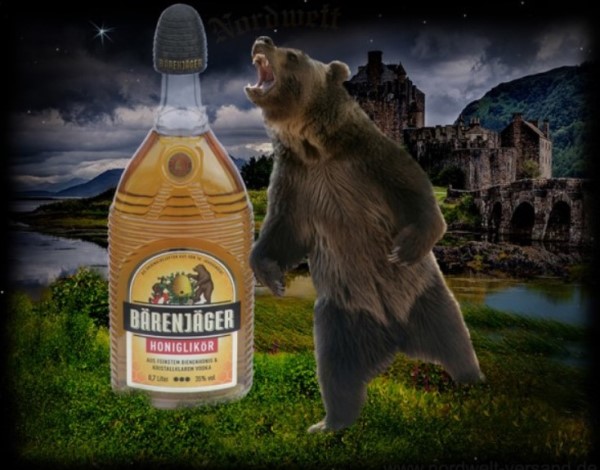 Bärenjäger or Bärenfang is a German liquor that first appeared in the 15th century. The recipe for a Bärenjäger is to add delicious honey and flavorings like orange peels to an existing Vodka. This liquor is often homemade by German families with an alcohol content of 30%-45% by volume.

However, the ready-made Bärenjäger honey liqueur by Kosher with 35% ABV is becoming the new trend. This drink contains up to 225g of natural honey made from nectar per 750ml bottle.

This keeps Bärenjäger from leaving a bitter aftertaste and becoming an excellent aperitif or digestive cocktail everyone should have at home. 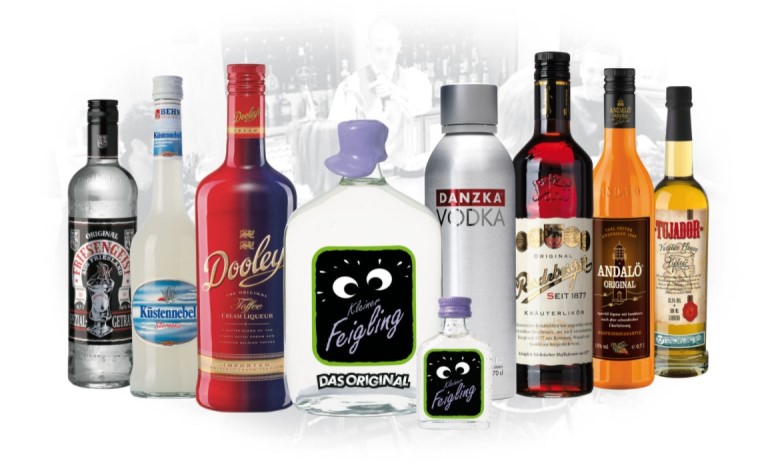 Waldemar Behn, also known as BEHN for short, is a family-run alcoholic beverage firm in Germany.

Although established in 1892, it was not until 1950 that BEHN’s first liqueur was released to the public. The company focused on developing this segment, and then in 1992, the party drink of BEHN Kleiner Feigling helped it spread in the community widely.

Waldemar Behn currently owns many brands under him such as Andalö, Dooley’s, Küstennebel, De Geele Köm, Kleiner Feigling. But the most famous of all is still Danzka – the world’s number 4 best-selling Vodka brand in duty-free shops.

Danzig Goldwasser is a famous German liquor manufacturer that features 23 karat gold flakes suspended in the drink. The full name of this alcohol beverage is Danziger Goldwasser, invented by Ambrosien Vermollen in 1598.

Goldwasser (or ‘God water’) uses native gold pieces that are safe for health. They add luxury to these liqueurs. Besides the tiny gold flakes, Goldwasser contains more than 20 other herbal and spice ingredients such as juniper, lavender, thyme, cinnamon, and cardamom.

1. What liquor is popular in Germany?

Jägermeister is definitely the national alcoholic drink of Germany.

2. What is the strongest German alcohol?

4. What is the legal drinking age in Germany?

Spirits consumption for people over 18 is legal in Germany. Wine, wine-like beverages, and beers can be sold to German over 16 years old.

If you have the opportunity to visit Munich for Oktoberfest, do not forget the names of the 10 German alcohol brands above. Their range of herbal liquors and vodka-based spirits will blow your mind and hit your taste buds. In addition, these brands are also widely distributed around the world, so don’t hesitate to own a bottle!